Bulk import uses ImportDataDescriptorResolverImpl implementation that uses DataGroup objects of type "IMPORT" and resolves ImportDescriptor objects within given group which are later used by the ImportService. 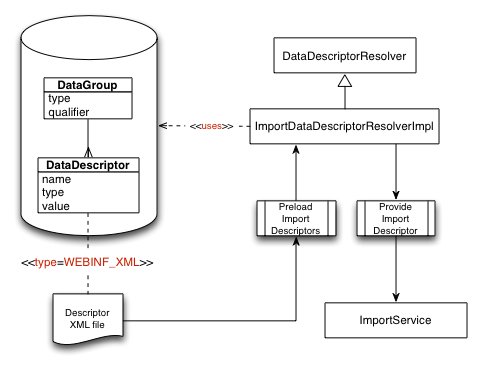 Out of the box version specific configuration for import groups is described in detail Manual ImpEx.

Note that data federation is fully integrated into ImpEx API and therefore all imported and exported records will be validated against the authorisations given to the user that requested import/export operation.

Query section allows to look up existing objects in the system to be updated with data from CSV tuple. In MERGE mode the data is either inserted (if look up query does not return existing object) or updated. For deletions "DELETE" mode must be set in the descriptor.

"insert-sql" and "delete-sql" are optional. When these configurations are omitted standard Hibernate save() and delete() methods are invoked on objects retrieved by the "select-sql".

All queries support templating mechanism where values from CSV tuples can be used as part of the query. All that is necessary is to specify placeholders in "select-sql", "insert-sql" or "delete-sql" which is represented by column name enclosed by curly brackets.

In the example above there are two placeholders "name" and "carrier" that will be populated using values in columns 0 and 10 respectively. Note that even though carrier is FK_FIELD the template value is raw value from CSV column and not the CarrierEntity object.

Each column under specified index is bound to property on the target entity specified by "name". Binding type is defined by the "field-type" configuration, which will set strategy for processing data in a given column.

All CSV data is assumed to be text and to give import descriptor hint for other data types "data-type" property can be specified.

Note that all decimals must be of type java.math.BigDecimal as rounding errors in Double and Float may alter original value. Hence those low precision java types are not supported by the system.

The values themselves also can be preprocessed in various ways.

The simplest one is to enforce character limit on the column thus avoiding database data size violation errors. This is accomplished by regular expression.

For example to select only up to 255 characters from CSV column a regular expression could be used:

Group specifies which part to use. So it is possible to create any regular expression and select the required group from the column data to use as import value.

To set a constant value "value-constant" tag could be used that will treat value inside the tag as if there was a column in CSV with this value.

"use-master-object" tag that accepts boolean flag allows to specify that value for given property is current master object. Master objects are available for sub import descriptors from SLAVE_INLINE_FIELD and SLAVE_TUPLE_FIELD.

For display values which can be translated in different language additional "language" hint can be supplied that contains two letter language code.

Columns 1, 2 and 3 are all mapped to displayName property on the target entity. The "language" tag allows to diversify which column represents which language value.

Below is an example of skuprices.csv format from the demo import (that corresponds to the above import descriptor). The header line is purely for human reference an is completely ignored by the import process. Textual data is enclosed by quotes ( " ) thus giving opportunity to specify special characters such as new line. The separator used is semicolon ( ; )

The entity type for image import descriptors is always "IMAGE". Import file descriptor is fairly standard and can be reused.

"select-sql" defined the type of the image data object in this instance "/imgvault/brand/" which is Brand entity.

The column 0 definition is purely for readability purposes and is not used by the image service. All data objects' codes are inferred from the image file name as explained in the bulk import article.

XML import and export build on the same concepts as any other import and export. Descriptor definition specifies the import descriptor resolver that will parse the configurations. Import director service will invoke the XML import or export service to perform the action.

Because XML import and export have a well defined schema the only option available is specifying appropriate handler to use. For exports all handler have "pretty" format by suffixing the name of the handler with "_PRETTY".

Here is the full list of XML descriptor available out of the box:

The following handlers are supported OOTB: